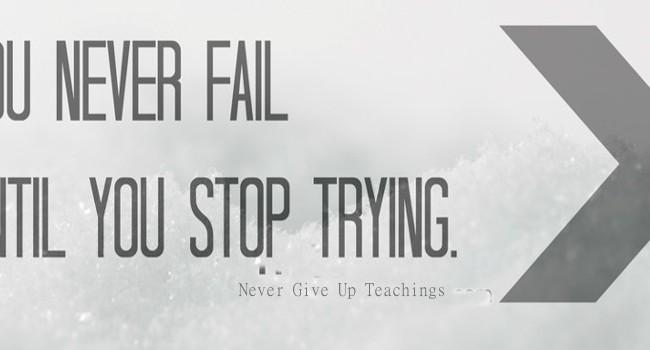 I would like to introduce lesson 1 of the never give up teachings and that is to never stop trying. It seemed that fate had come to conspire against me when my entire world began to crumble around me. I had lost the house of my dreams, went through bankruptcy and everything else these two events brought with them.

Simply I had met failure head on, and it wasn’t nice.

It didn’t just affect me, but also my wife and two children. Our world had been torn apart.

What was I to do? Give up on those dreams I had been driven by for so long, accept I had lost my personal war and just allow my life to meander on to ’nowhere land.’

“For a just man falleth seven times, and riseth up again; but the wicked shall fall into mischief.” Proverb

The alternative was to embrace all the challenges that I had been confronted by, refuse to accept failure or living the rest of my life dissatisfied. I knew I had to get back up again and move my life forward once again.

You see it’s a simple rule of life… failing is not the end. The end is when we decide, and if you decide to never stop trying then you’re giving yourself the best chance of making that end a place where you want it to be.

There was one thing I had going for me. I had always been driven by the inner picture that I held, of goals I wanted to achieve, of the life and business I wanted to build. I refused to believe I couldn’t go on to achieve these and so kept trying.

This had the power to drive me forward, gave me the hunger to taste victory again, and provided me the resilience to get off the floor after every defeat.

My dreams empowered me to pick myself up and move my life forward once again step by step.

You can’t kill an idea once it has formulated in your mind. And I could clearly see what I wanted to achieve, who I wanted to be and the things I needed to do.

I came to one essential realization and that is the only real failure, is the failure to try. To give up is the most crazy choice we can ever make. You don’t want to live in regret. Regretting not doing want you can. The things worth having most usually involve the greatest effort and the greatest struggle on our part. But nothing can be more heartbreaking than when you give up on your dream.

We make the choice consciously or unconsciously every minute of the day whether to carry on trying to make our dreams come true, but you must never stop trying and certainly never let giving up be one of your options. If you want something enough you will never stop trying.

The key is getting up in the morning and doing your best, trying as hard as you humanly can.

I decided that I wasn’t going to stay where this failure had put me. The person that risks nothing, does nothing, has nothing. All we know about the future is that it can be different. But you won’t know if you let fear hold you back. Believe everything will be all right in the end and keep on trying. Refuse to give up!

Most of the important things in the world have been accomplished by people who have kept on trying when there seemed to be no hope at all. Dale Carnegie

Please come join us at our Never Give Up Teachings Facebook page here.